45 revolutions per minute is my choice of format when it comes to beats and breaks on vinyl. Don't ask me to go into detail - put simply I just think the breaks sound crunchier and much louder on 45 revs. So whenever I get the opportunity I pick as many drum breaks on 7" single that I can find. Whether it be a Ultimate Breaks 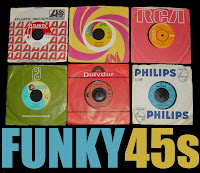 & Beats classic or a few bars of open drums I just gots to have it. I'm real fond of uptempo b-boy joints with bongos and all of that, but also I can dig those laid back downtempo beats that get your head nodding. So while all those other hungry beatdiggers are raiding the LP and twelve inch crates, I'm lurking somewhere nearby with a box of dirty 45s. That's where I always head first.
Here's a few funky 45rpm records from the stash, plus a bonus looped nugget to keep you bouncin'!


THE GRASSROOTS - "You and Love Are The Same" 1969 DUNHILL RECORDS
I have this classic break on LP but had to cop the 45 when I spotted it in a rock record shop. 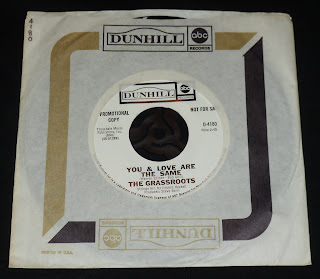 This beat is off the usual funk radar, but yet it appeared within hip hop music very early on due to Lenny Roberts' (RIP) Ultimate Breaks & Beats series. I forget which one but its the same one that features "Blind Alley" by The Emotions. The track itself is a trippy rock joint but eventually breaks down into a snappy drum break and then a fat ass bassline! Also I remember this beat from Q-Berts legendary "Pre-school breaks mix". Easy to find, and cheap as chips when you do come across it. As in the lyrics "I feel so groovy and high".


PEPPERS - "Stuffed Pepper" 1972 AVALANCHE RECORDS
Not to be confused with the more well known group THE PEPPERS, PEPPERS was an early 70's funk outfit about which 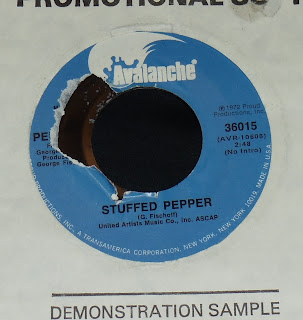 I can find very little. A few mentions on some record websites and a youtube video, but this track deserves more attention than it is currently is getting. In fact, I included it on my BORN TO GET DOWN breaks selection a while back as it is perfect beat fodder for breakers. The intro on this record is a stormer so I took the liberty of performing a Louis Flores style edit to the intro, but don't miss the breakdown in the middle it is nothing short of killer! A fading horn stab leads to some manic bongo riffs and repeats just as you would want it for playing at a b-boy jam. This is some raw funk and a highly recommended record for your crates. My copy is a little beaten with the label coming off, but I have yet to find another. If you stumble upon a box of these little beauties please remember where you heard it first and grab me one. 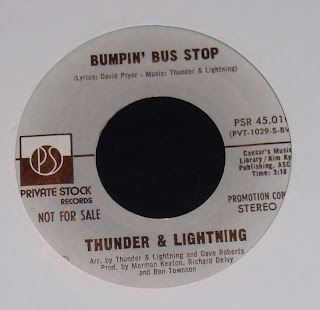 Lord Finesse on "Save That Shit" and many others including recently by Kanye. But finding out the title of this track took me years, and even longer to actually track down a nice copy for a sensible price. You will no doubt recognise it from the very intro vocals and drum beat, but I love the section in the middle that Positive K ripped it over on "Step Up Front" which incidentally is one of my favourite hip hop joints from that era. So I made it my FIRST PRIORITY to get a copy of the break (can you see what I did there?) Check out "Bumping Bus Stop" and then recite Pos K's lyrics over the looped beat. 100% d-dope! 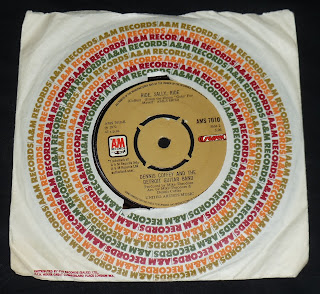 Anything by this guitar legend from the early part of the 1970s is guaranteed listening material in my eyes. So I pick up almost everything I see by him or featuring his production.
Now this record is by no means rare, and be found fairly regularly in record shops for only a few pounds, but the pounding drums and sleazy guitar riffs are high quality. I must have heard this track a million times but I never get bored. I'm not sure if Coffey's fellow Funk Brother Bob Babett is on bass on this record, but I'm sure he was on "Scorpio". It was as a member of the Funk Brothers studio band that Coffey played on dozens of recordings for Motown Records, and introduced a hard rock guitar sound to producer Norman Whitfield's recordings, including distortion, Echoplex tape-loop delay, and wah-wah.


BARRETT STRONG - "Stand Up and Cheer For The Preacher" 1973 EPIC RECORDS
Continuing the Motown theme from above, BARRETT STRONG was the first artist to have a hit on the 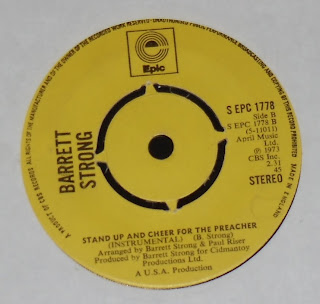 said label and also became a writing partner of Norman Whitfield on tracks like "I Heard It Through the Grapevine". So I was surprised to know there was a crispy little drum break lurking on one of his solo releases from 1973. Thanks to DJ FORMAT who finally came up with the goods after I had missed out on previous copies. The pressing isn't great on the UK copy I have so I will have to hunt down a US EPIC release in the hope that the drums sound a bit tougher.

Nice one Dyno cheers for the rips. Look forward to bomping these d;-P

Nice selection D.
Keep meaning to do a similar post but don't seem to have the time at the moment.
Soon come...

thanks for dropping comments fellas, I will be back with some more 45s soon to keep your eardrums happy.

fresh tunez and nice loops,thanks i'll be using these,thank for puttin up a blog thats really sayin something!!! stay fresh!