Some of my long term readers will be aware of my quest a few years back to find out more about a certain radio personality and hip hop producer by the name of VANDY C. Now all you hardcore hip hoppers who know your history won't need any introduction to VANDY C's work because back in the 1980s he was a busy man who at one time or another held it down as a DJ, Producer, Radio Show Host, Show Promoter, as well as an Indie Label Executive. And hence the name of his long running radio show GET BUSY OR GET LOST which aired on 91.5FM.
At the time I began my quest I could not understand why this man was not receiving more props from the hip hop community, and why there was zero information online about him. Suffice to say that this man also regularly worked behind the desk alongside the late great PAUL C McKASTY in the late 80s, so I'm sure you understand what level he was on from a production point of view. And for me personally records like the FREAK L joints on URBAN ROCK RECORDS, "Jus Feel It" by VANDY C himself with BILL BLAST, and TRAY BAG MC's "At A Jam" are some of my absolute favourite records from that era. VANDY was responsible for all of these. 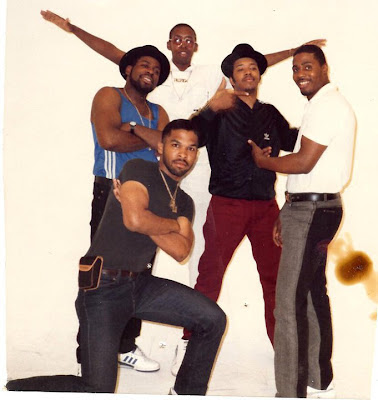 PHOTO: TRUE PATRICK, RUN, JAY, BILL BLAST and VANDY C during the filming of KRUSH GROOVE. Shortly after my post in June 2009, I received a message from VANDY's daughter thanking me for my post and pointing me in the right direction where I could contact her father and updating me on his current role as PASTOR Vandy Colter. It seems he is still rocking crowds with a microphone and the skills he learned through his years in hip hop were still relevant for him today. With his daughter's help I was lucky enough to contact VANDY himself and found him to be an interesting and exuberant character who was more than willing to share some stories. The few things he told me at the time were like nuggets of gold info-wise, and I was keen to interview VANDY at some point to put an end to the lack of biography about him on the web.
This week I am very happy to tell you that despite my interview with VANDY C not reaching fruition, I am pleased to find out that that hard working dude KEVIN BEACHAM from FIFTH ELEMENT ONLINE has just conducted a full length video interview with VANDY C and it is live on the web for all to see as I write this. I must admit KEVIN has done a much better job of the interview than I could ever have done, but that's to be expected from KEVIN he truly is a positive force within the hip hop community.

So ... CLASS IS NOW IN SESSION! You NEED to sit back relax and pay attention to what this man has to say as he is an unsung hero of hip hop who was deejaying before the days of Grandmaster Flash and left his mark on the culture in his own inimitable way. Check out the full length interview including bonus footage over at FIFTH ELEMENT ONLINE. Massive respect and props go out to KEVIN BEACHAM, VANDY C, VANDY's daughter, BILL BLAST, TRAY BAG MC and FREAK L.