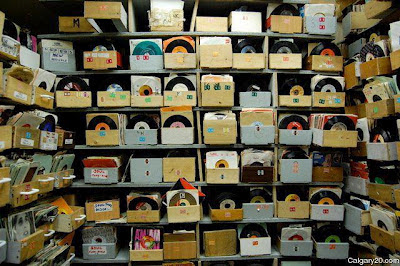 Every which way I look these days I see a healthy interest in 45rpm seven inch singles. Although these little records have never been the format of choice for Hip Hop record buyers (12" was always the preferred version throughout the 80s, 90s and early 00s) it has always been so for Funk, Soul and Northern Soul enthusiasts. In fact me and my fellow VINYL VETERANS members are all partial to rocking out with 45s, as are my fellow beatheads DJ FORMAT and MR THING (let's do some trades soon fellas!). And in NYC you have the MOBILE MONDAYS strictly 45s night which has seen guests like DJ MURO, DJ SCRATCH, FORREST GETEMGUMP, MAC MCRAW and BOOGIE BLIND dropping little records alongside OPERATOR EMZ, NATASHA DIGGS and JOEY C. I'm sure you have also seen DJ MARK 45 KING rocking little records on his two portable VESTAX record players. So if you've been thinking this 45rpm buzz at the moment is simply a current trend: it ain't ... us collectors have many habits not necessarily shared with the outside world. I think it's just the case that we have all together realised that we are on the same collecting buzz.
Personally I've always been very fond of 45s, whether that be funk, or breaks but especially the unusual Hip Hop ones that I have come across whilst diggin' over the years. Hence I've always had a crateful (and more) Hip Hop 45s and I still seek out the ones that I know I'm missing. I've also noticed a huge amount of current Hip Hop releases have been dropping on the 7" format in the last few years, and I think the high cost of producing vinyl these days has contributed to that. But I'm still happy 'cuz these little records are easy to carry home, easy to take and play out, have fantastic sound quality (styrene not included in this) and in many cases are a cute promotional only item so were not widely available.
In fact the very first post I did here on DAILY DIGGERS was a list of five funky Hip Hop 45s. You can reminisce on that very first post HERE, and when you've finished reading that here is another fine selection of little hip hop records.

PUBLIC ENEMY - "You're Gonna Get Yours" 1987 DEF JAM RECORDS

It was 1987 when PUBLIC ENEMY unleashed the beast that was their "YO! Bum Rush The Show" LP on our unsuspecting eardrums. My first encounter was hearing "Timebomb" played on RADIO 1's JOHN PEEL SHOW - a show that would maybe play two or three rap joints if you were lucky on a weekday evening. JOHN PEEL was no slouch when it came to picking up on quality early Hip Hop music. In fact I think it was him that also introduced me to the Beastie Boys.
PUBLIC ENEMY were sonically groundbreaking - remember this is 1987 when some artists were only just mastering funky drum patterns on drum machines, and heavy sampling was still yet to be the norm in the music. What ERIC B and RAKIM brought to the forefront musically was taken like a baton by PE and THE BOMB SQUAD and they created their familiar wall of sound using classic breakbeats with much harder drums, and it was a sound we had never heard before, especially with CHUCK's powerful lyrics and FLAVOR's incredibly wild persona.
"You're Gonna Get Yours" is one of my favourite PE joints to this day. That superb blend of DENNIS COFFEY's "Getting It On" loop, CAPTAIN SKY "Super Sporm" sound effects coupled with the military sounding drums and of course the "car skids" cut up by TERMINATOR X (oops I meant JOHNNY JUICE). CHUCK D's lyrical content confused me on first hearing this track - I didn't know what an OLDSMOBILE was in 1987. The flipside of this 45 is "Miuzi Weighs A Ton". Two of the best PE tracks on one 45 so it's well worth hunting one down. 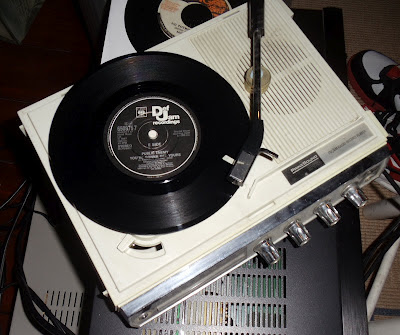 I'm taking it back to 1983 with this Electro monster that I first heard on buying my copy of "CRUCIAL ELECTRO" compilation LP from the ELECTRO series on the STREET SOUNDS label. To find a 12" version in decent condition took me some years to finally find, and then a few years later I found several stock copies of the promo 7" single in one stash. Suffice to say I copped them all!
This is one sinister sounding Electro record, from the jungle drum intro to the vocoder hook and Egyptian sounding melodies. The drum programming on this record is incredible, and in my opinion it features some of the best rap vocals recorded in 1983. Production credit according to the label go to GORDON BAHARY and RAY "PINKY" VELASQUEZ. On the flipside is the Kingdom Version without the vocals which gets as much play as the vocal version. 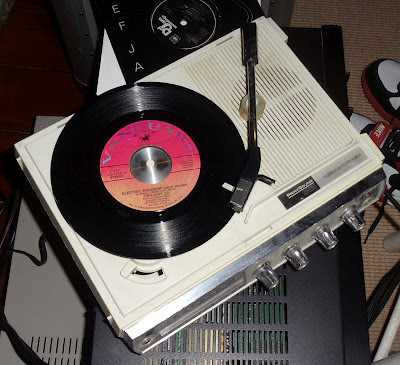 TUFF CITY has always been one of my top choice labels when it comes to Hip Hop records, and I must have over 100 releases just on this label. Although for many years one record has eluded me as it never seems to show up on one of my numerous record buying missions. Nor have I seen a cheapish copy online or during trading sessions with my peers. So at this current moment in time I don't own the 12" version of "Dedication", however I recently scooped a promo 45rpm single with the radio edit on both sides on a little white label 7" (catalogue number TUF450001 which makes me think this is the first 45 release on the AARON FUCH's TUFF CITY label.)
I have a general rule in hip hop music - if it has singing anywhere in the song then I won't like it full stop. There are a few exceptions, for instance anything with TJ SWAN, but on the whole I can't abide singing along with MCing. However this FEARLESS FOUR joint is so good I am happy to make an exception to the rule. The bassline is crazy dope, although the beats are far from mindblowing. But THE GREAT PESO, DEVASTATING TITO, MIGHTY MIKE C and DLB's lyrics are so dope this record could be an anthem for 1985 Hip Hop as they string their vocals together so proficiently. The group who started on BOBBY ROBINSON's ENJOY label were still sounding good when they signed to TUFF CITY. This 45rpm version is tough to find, so dig hard and ask around if you need a copy. 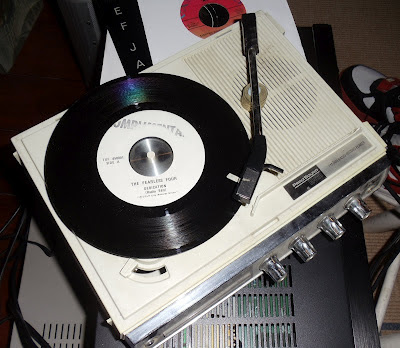 SPOONIN GEE or SPOONIE GEE, whatever, this record is so f#cking dope. Unlike many of the Disco Rap records of the period this one has a live funk band who actually play some serious funk as a backing track similar to the sounds of the early park jams. So many records of this era were poor imitations or simply Melody Raps with wack melody grooves and choruses. I wasn't feeling that sound and it took rap music many years to finally get back on track with the breaks. However this SPOONIE G joint is a certified winner from the catchy vocal intro and the sleazy bassline to the super confident vocals from SPOONIE (nephew of the late great BOBBY ROBINSON). I got so bored with hearing "Rappers Delight" by the SUGARHILL GANG (probably because those dudes weren't even real rappers) whereas this "Spoonin Rap" record has stood the test of time so very well. It's 33 years since it was recorded and it still sounds so damn good. 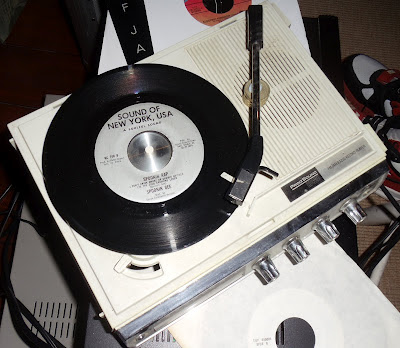 Always a sucker for any vinyl release on FIRST PRIORITY, this 45rpm 7" version of POS K's classic joint was not a particularly expensive purchase, but rarely crops up on 45rpm single. Nor do the other earlier MC LYTE and AUDIO TWO releases on the same label. Once again I'm sure these were promotional only records and as such never got to see the record shops at the time of release. They do crop up here and there, but many are in particularly bad condition.

POSITIVE K couldn't be more vocally laid back even if he tried. He always sounded so smooth and definitely had his very own "smooth brother both on the mic and under the sheets" type of style and demeanour. I imagined he got mad ladies whilst MILK and GIZMO were just chillin' drinking milk and wearing customised tee shirts by SHIRT KING PHADE. He's definitely super confident with the ladies, as his lyrics tell - "...I fuck the perm out ya hair!" 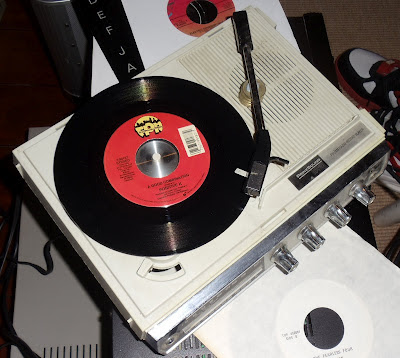 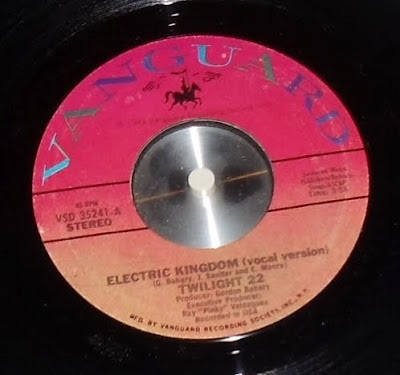 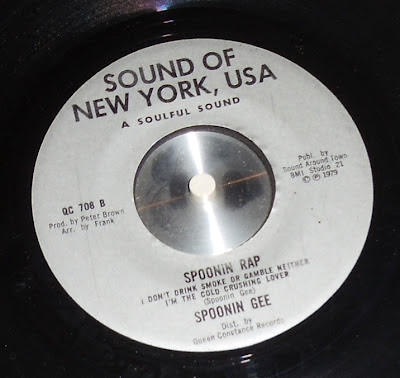 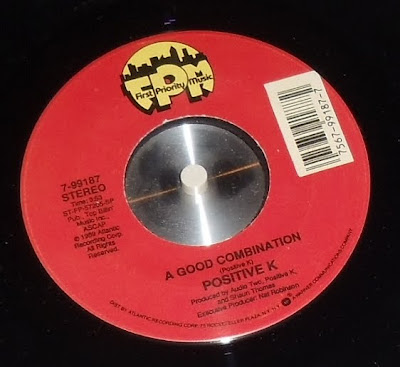 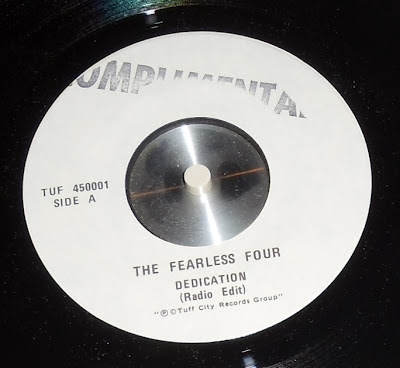 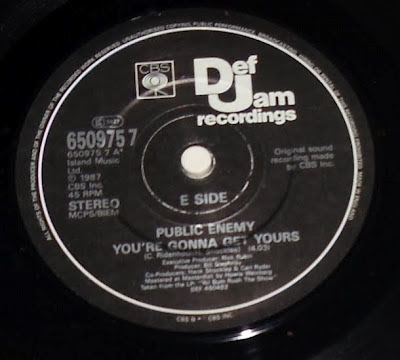 That Positive K seven is tough!

love the positive K too..

Did you ever hear the story of how Diddy blackballed Pos K the fuck out the industry? I remember Combat Jack wrote about it once, damn shame! It's not like we needed any more excuses to hate Didddy!