A Message to the 45 Haters

Well it looks like I'm back up and posting on the regular again after a long time away from blogging. As more and more hip hop related websites sprung up over the last 5 years I felt my job was done as far as bringing a slice of authentic hip hop culture to the interweb. I started this site in 2007 primarily because of the lack of real deal hip hop info online, but the tables have now turned (pun intended) and there is a plethora of great places to go online for your daily fix of b-boy information, whether you are into breakin', beatdigging, graffiti writing, record collecting, turnablism or whatever. There is no longer a gap in the market.
HOWEVER, I will still be popping up from time to time to share with you any treats I think you need to see or know about, and to reminisce on good times long gone. And maybe every so often to voice my opinion (for what it is worth) on some of the bullshit that surrounds the culture. I think this may be one of those times...

So, here is my message to all the 45 haters out there. Yes you know who I am talking about, those dudes who get all hot under the collar when they see some of the prices rare rap 45s are making at the moment. And not just rap 45s, but any 45s (especially those that have received a little hype lately and are in high demand). First of all why you are concerned with how the next man spends his money is kinda alien to me - each to their own. But Ive been quiet for awhile now and I think it's time I shared my opinion on the subject. After all, I'm one of those guys who has many of those rare 7" records they are referring to. But there ain't no shame in my game, and here's why.... 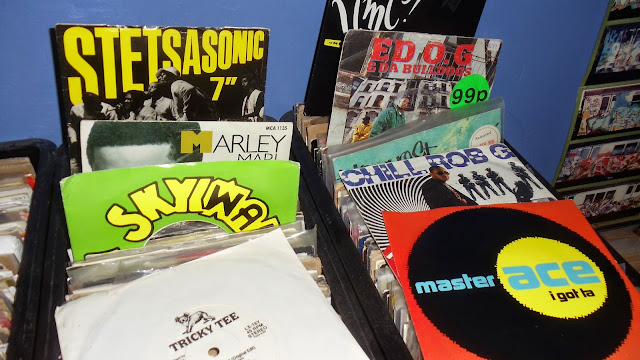 Firstly, I've always collected hip hop 7" singles. I started buying records as a small child on the 45rpm format (99p from Woolworths) so anything on this format is always gonna be dear to me. So, over the years I have always picked up any little hip hop records I have seen on my diggin' missions. They never cost me a lot, and it was always surprising what records were available on 7", especially the European labels who released some classic hip hop tracks on 45rpm not available in the US market. Now obviously hip hop records were all about the 12" format during the 80s and 90s, so it is no surprise that the US market didn't always put out a 7" version, and if they did it was mostly a promotional tool or jukebox single.
By the turn of the millenium, I already had a nice 2 crate collection of rap 7" singles, including some rare titles like ULTIMATE FORCE's "I'm Not Playing" and JUNGLE BROTHERS' "Because I Got It Like That" (Original Version) and I was always hungry for more. When digging online became the goldmine that it is, almost every record collector in the land realised they could find records online that were never gonna be found in their regular physical shops and boot sales. That's when the online boom began. Postage was inexpensive, the choice was endless and ever changing, and the only effort needed was a little bit of knowledge and an internet connection. I mean ... the records even came delivered to your front door! What more do you want? There is no shame in digging online, and anyone who says they don't do it is either a liar or a philistine.
Ten years on, we've all stocked up on random rap, bought that missing LORD FINESSE record from our collection, and almost completed our TUFF CITY 12" discography. Classic Hip Hop 12"s saw a boom in prices initially and as the collectors out there filled in the gaps so things began to level off. It's not rocket science, but buying trends are exactly that. Trends come and go as in all aspects of life.
So now 15 or so years after the online explosion, people are feeling the grip of the economic crisis, and we have all learned to tie our belts a little bit tighter, and carefully watch how we spend the pennies we earn. At the same time, the cost of postage from continent to continent has sky rocketed (globally with few exceptions), and now a 12" single or LP can cost in some cases $20 just to be packaged and sent to you. Gone are the 12" bargains, even if the record only cost you a single buck or pound or Euro by the time it arrives at your front door it's become costly (and that is before any customs charges if you are unlucky enough to be hit with one). All of a sudden it is not such a cheap hobby finding 12" records online and having them posted.
So is it really a big surprise to people that the 7" 45rpm format is getting some well deserved attention right now? Does it really shock you that a DJ will pay over a hundred for this or that promo rap 7" that very few people own? The 7" format is convenient, concentrated, easy to carry, cheap to post, and gives you that dope track you wanted with no filler or wack remix which you probably hated anyway. The have always been of interest and always will be. So if you're late to the party and wanna have a gripe about who or what record is being bought for what price, maybe I can suggest you worry about your own game and let those 45 fiends worry about theirs. If you wanna worry about money being spent in the wrong places maybe you should check out what the Government does with your taxes, why major labels push violent gang-promoting rap music, or how corporate corruption if feeding the rich whilst depriving the poor. Don't focus on some record collector paying over the odds for a rap 7". That shit is unimportant to you.


(Edit: Oh .. and if you're thinking "another rap blog going on about trendy rap 45s" then check out the 2nd post ever on DAILY DIGGERS from July 2007 HERE. Nuff said.)
I'm reading: A Message to the 45 HatersTweet this! Posted by Daily Diggers at 12:46

Yesssss.... I had just said this same thing the other day. I've never been once to consern myself with what others do, in that way.

Older kid was gassing off about people being obsessed with rare records (not rap, beat cats).

Me, for that. I don't want these 'saught after rare records' because most arent my taste. But never will I slam others for it. Thats a part of them!

thanks Kizzah. I've never let that shit bother me, but some people get real sour about what so-and-so bought for X amount of money. I was always taught to pilot my own ship whatever others were doing.